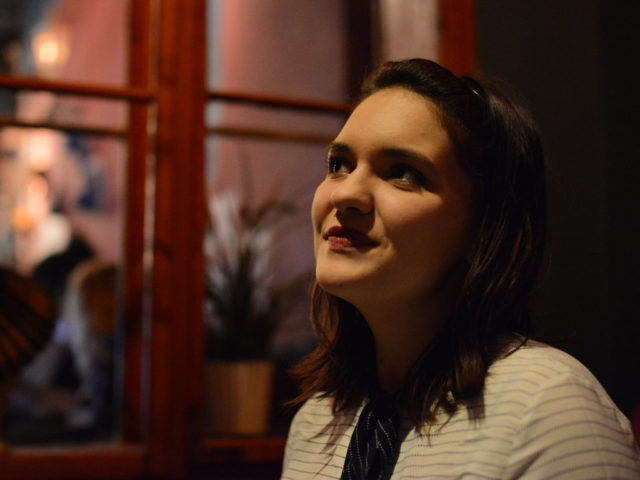 I heard for the first time about Cătălina on the news, on a television channel in the Republic of Moldova. The reporter announced that during the Students’ Gala, Cătălina Brînză had been awarded the title “one of the best students learning abroad”.

I looked her up on the internet; I learned that she lived in Cluj-Napoca and that she was part of the team that organized dance classes for the elderly in the city. It seemed like a very interesting idea, so I got in touch with her and invited her to a discussion.

Hello, Cătălina! It’s nice to meet you! Please tell us a little about yourself. Who are you? Where do you come from and what do you do?

Hello, I’m glad to meet you too. My name is Cătălina Brînză, I am from the Republic of Moldova, but in the last 6 years I have been living in Cluj-Napoca where I finished my university studies and a master. I work in communication and in my spare time I am involved in social projects related to public life.

I believe in projects that come from the heart, that help people be better, projects that are not made just for the sake of it. I want to be a person involved in the community, who knows the existing problems and who makes an effort to solve them. My model is Zorba the Greek – the man who knows and does the right thing without taking into account the social conventions.

“As a VOLUNTEER I realized that the age barriers we are imposing on ourselves are artificial and that it’s not ok to judge people by their appearance”.

Tell us a more about your life in the Republic of Moldova. Have you always been so active?

Not at all, I was a very shy child, so for me volunteering was the way to get out of the shell. When I was young I dreamed of becoming a teacher or a dancer. In the 4th grade I participated in a journalism course organized by the Media Center from Chisinau, this made me interested in knowing people and getting involved in the society.

In the 8th grade I started doing volunteer work and I met a lot of interesting people, including foreign volunteers. When I was 15 years old I was asked to mentor a 27-year-old volunteer from Canada. It was then that I realized that the age barriers we are imposing on ourselves are artificial. I understood how important the human interaction is and that it’s not ok to judge people by their appearance.

When it comes to studies – I have always felt an attraction for human sciences. In the 8th grade I started participating in the Olympiads, especially in history, French and Romanian. In the 12th grade I managed to take the 1st place at the National Olympiad of History and the 2nd place for Romanian.

Why did you move to Cluj and how did this work out for you?

Right after I moved to Cluj, I had a strange relationship with the city. I did not really like it and it was difficult to adapt. Now Cluj-Napoca is one of my favorite cities. I think it offers many opportunities when it comes to cultural, social and economic spheres. Coming with all this baggage from Chisinau, I needed to be as involved in Cluj-Napoca.

And I did. I continued to volunteer and participate in internship programs to discover and gain more experience: to learn a profession, to develop some skills that I can later use in my projects.

“If people cared about what they are doing and if they had some initiative, things would be much simpler in many institutions”.

“If people cared about what they are doing and if they had some initiative, things would be much simpler in many institutions”.

In my first year at the university I had a course held by Răzvan Cherecheş, who is the director of the Cluj School of Public Health – a center focused public health research where people develop projects related to health policies.

During his course Razvan told us a lot about his center. I liked what I heard, so in 2012 I did an internship there, and in the next year I got hired. I started with simple things, and then quickly transitioned over to making big projects that needed an advanced level of training … a training that I did not have.

It was tough, but it helped me get out of the comfort zone. I got to know me better and I learned a lot of useful things. That’s where I learned how important it is to ask for help, instead of stubbornly trying to do it all by yourself.

That is where I realized that things would be much simpler in many institutions if people cared about what they were doing and if they had have some initiative. After two years at the center, I felt the need for a quieter environment, so I moved into the corporate environment where I work today.

What about the idea of organizing dance classes for the elderly? Where did that come from? And how did you get involved in this project?

The idea came from Petru Sandu – a former colleague at Cluj School of Public Health went for six-month academic internship at the University of Iowa in the USA. On his return he had to implement a $ 5,000 social project funded by the university.

Petru Sandu graduated from the Faculty of Medicine and Physical Education and Sport. He is very interested in promoting sports and physical activities. He came up with the idea of a research project aimed at studying the benefits of dance in the elderly in Romania. I always enjoyed dancing so I decided to be part of the team from the first edition that took place in 2015.

“Dance creates a special interaction. You take some strangers and help them forget everything for a few minutes by making a special connection through music and movement”.

How was the dance course? Did the seniors like it?

The course took place twice a week between March – April and May – June and was held at day centers for the elderly. We had 50 participants. We had Lucian Ambrosie as a dance instructor and he knew very well to communicate with seniors and taught them the basic steps for bachata, waltz and tango.

Dance creates a special kind of interaction. You take some strangers who see each other for the first time and help them forget everything for a few minutes by making a special connection through music and movement. This is wonderful.

At the end we had a graduation party and the participants were very excited. We also enjoyed much interacting with them and making them feel better. Although we did not have any funding, we decided to continue the courses the following year.

How did you come to organize the Adagio Elderly Dance Festival?

The idea came during the second edition of the dance classes. We wanted the festival to be more like a party than an actual contest, an event where people feel good. The first edition of the festival took place on June 19, 2016 at the Casino and involved 15 institutions and organizations. The only sponsorship we received was 4,000 lei offered by the Local Council.

We had a lot of media coverage in the press, on the internet, on the radio and on TV, and we made many partnerships that helped us. The contest had both pairs formed before and pairs formed on the spot. The jury was made up of professional dancers who chose the 1st, 2nd and 3rd places for each category. The festival had about 40 participants, about 150 people in the public. The oldest dancer was 80 years old.

What plans do you have for the future and why do you think these events are useful for the people of Cluj?

First of all we want to organize the second edition of the festival. We already have a date and a place: September 30th, at the Casino. This year Adagio will be included in the European Sports Week. Secondly, we will set up an NGO with the purpose of promoting physical education and sports by combining research with community projects.

”I met many extraordinary seniors through the projects, and I realized that, despite their age, many of them are young at heart, that they still want to live and enjoy life”.

It is normal for young people to receive much attention, because they are the future. However, we believe that elderly people deserve attention too. We have already shown that we can create beautiful projects for them.

In the last 2 years, I met many extraordinary seniors through the projects, and I realized that, despite their age, many of them are young at heart and they want to live and enjoy life. Being old does not mean that you give up on everything, that you stop doing good things for other people.

Physical activities help the elderly integrate the society, forget about problems and feel better both physically and psychologically. Thus, the costs for medical care decrease. Unfortunately, in Romania, little is invested in programs for the elderly. We want to change this step by step.

Valentin Vesa: “At ShoeBox we try to plant seeds of kindness, so that the adults of tomorrow have a good heart”

Iulian Timar – “We should take refuge in nature more often, because we were not made to live in the concrete jungle”

Diana Hener – the young woman who made the tour of...

27 August 2017
Diana Hener is a young woman who made the tour of Romania by bicycle in 2016 to support the people diagnosed with multiple sclerosis and to find interesting people and unusual places in Romania.